Drilling an ultra-precise hole can be tough. Material behaviour, surface irregularities, and drill point geometry can all be factors leading to inaccurate holes. A spot drill, if used properly, will eliminate the chance of drill walking and will help to ensure a more accurate final product.

When Should I Use A Spot Drill?

Is a spot drill necessary every time an accurate hole is to be drilled?

If you use a carbide drill, or a screw machine length drill, spotting is typically not needed. The carbide itself is so rigid compared to HSS that the drill will go where it is pointed. As a matter of fact, most manufacturers recommend against spotting either a carbide twist drill or an insertable drill because its easy to chip the carbide in the dimple.

Self-centring carbide drills stop the need for a spot drill, which saves you on cycle time.

There are times when you won’t be able to avoid a jobber length drill because the hole is too deep for a screw machine drill. In that case, you could spot drill to start the twist drill, or you could drill the shallow part of the hole with a screw machine length and then switch to the longer drill.

Can I Use a Centre Drill Instead of a Spot Drill?

A lot of machinists use centre drills for spotting instead of true spotting drills. Centre drills are intended to be used to create a hole suitable for a lathe centre. They have a 2 part tip that has a small pilot as well as the larger countersinking area of the bit.  While centre drills are cheaper than spot drills, they have some disadvantages. The small pilot tip is very delicate, and if it breaks, the drill will quit cutting. Not a good thing if you’re running a job that involves spotting a lot of holes. Another problem is the hole angle of a centre drill is typically 60 degrees. When spotting, you want an angle that is larger than the twist drills angle, if possible. The narrower the spot angle, the more near the outside diameter of the twist drill first contact will be. If the twist drill’s flutes aren’t perfectly sharpened, one will contact the spot hole before the other and the drill will try to deflect. This defeats the purpose of spot drilling and can result in a less accurate hole. The broader angle of a true spot drill means the tip of the twist drill cuts first, which makes for a more accurate hole. 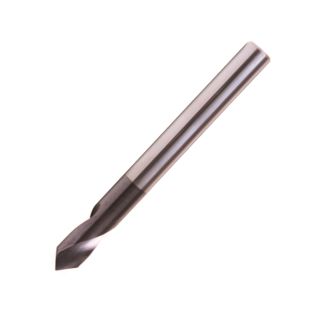 Ideally, the centre of a carbide drill should always be the first point to contact your part. Therefore, a spotting drill should have a slightly larger point angle than that of your drill. If a spotting drill with a smaller point angle than your drill is used, your drill may be damaged due to shock loading when the outer portion of its cutting surface contacts the workpiece before the centre. Using a drill angle equal to the drill angle is also an acceptable situation.

The spot drill has a short, thick shape. A short chip-form for excellent rigidity, which makes the spot drill even more effective. The geometry of the tip is just right for drilling a shallow hole in the surface of the workpiece; the thin cross-edge of the centre drill compared to standard drills provides an effective cutting effect on the workpiece material.

The spot drill is also evolving and its function is no longer limited to the drilling of pilot holes. In addition to this, it is possible to mill edges and to drill as well as mill cutters in one piece. The angles can be 60°, 90°, and 120° and can be used for a wide range of processes, including:  - Drilling of spotting holes
- Bores
- Engraving
- Chamfering
- Deburring of edges, etc.

Most tool manufacturers agree that the tip angle of a spot drill should be equal to or greater than the tip angle of a secondary drill. The secondary drill should contact the spotting  hole with the drill tip – not the cutting edge – which eliminates the excessive cutting pressure on the cutting edge of the drill that can lead to premature tool failure and reduced hole quality.

The opposite is the case with carbide drills. Cemented carbide drills are usually designed with a reduced cross edge, and due to the brittle nature of cemented carbide we do not want the cutting edge to cut into the workpiece first. Therefore, it is recommended to use a spot drill with a larger tip angle so that the cross edge cuts into the workpiece before the cutting edge.

The suitability of the cutting speed and feed rate depends on the workpiece material, insert substrate and coating, as well as the requirements of the drilling process itself. As a general rule, the cutting speed and feed rate for spotting drills should be somewhat lower than for secondary drilling. The purpose of spotting drilling is only to provide a correct starting hole position for secondary drilling, so there is no need to achieve very high feed rates.

Most carbide drills usually do not require a pre-drilled spot hole as they are more rigid and self-centred, making them less prone to drift during machining, so it could start drilling straight away. Pre-drilling a pilot hole before drilling with these drills may even be counter-productive and result in chipping or breaking of the cutting edge.

If necessary, a shallow pilot hole can be made for a solid carbide secondary drill. The thickness of the carbide bits cross edge can be measured and used as the depth of the spot hole. This small spotting hole, in addition to guiding the secondary drill, also prevents it from being subjected to excessive cutting pressure.

Centre drills are sometimes used in machine shops to process spotting holes, but they are not designed for machining spotting holes. The purpose of the centre drill is to make a spot hole in the end face of the workpiece to ensure that it is mounted on the tailstock of a lathe, or to mount it between the two centres of a grinding machine.

The centre drill is a combination of a drill bit and a countersink tool, which is not the best tool for machining spotting holes. In fact, the centre drill is a stepped drill that can process two different angular hole shapes – a 90°countersink and a 60°pilot hole at the mouth of it. The secondary drill bit contacts the 90°countersink at the mouth of the spotting hole and then contacts the 60°pilot hole machined by the guide section of the centre drill at the bottom of the hole, which has the potential to deflect the secondary drill bit. 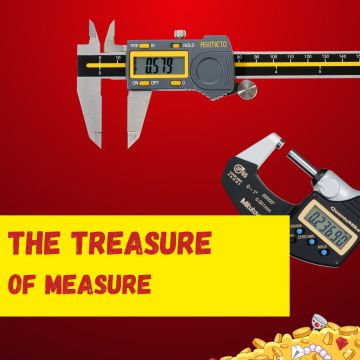 The Treasure Of Measure? (Digital Calipers)

A caliper is a tool used to measure the distance between two sides of an object: you can measure, with an accuracy down to... 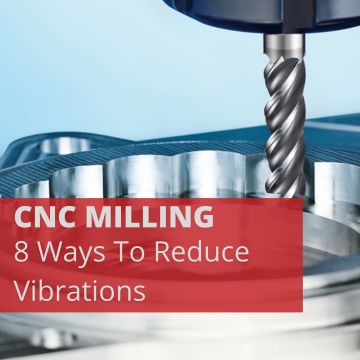 In a similar way to how no one likes a chatter box, no one likes chatter when CNC Milling either! Chatter causes poor... 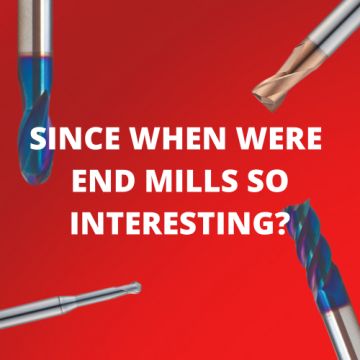 Since When Were End Mills So Interesting? (+8 Bonus Tips)